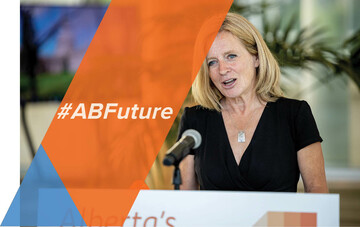 CALGARY – Rachel Notley and the Alberta NDP are presenting a bold economic vision for the future of Alberta and calling on all Albertans to participate in building a modern strategy for achieving it.

In a video address released Thursday, Notley launched www.AlbertasFuture.ca, a new website designed to unite Albertans in building a new economic strategy. Jason Kenney’s $4.7-billion-dollar corporate handout has failed to address the province’s economic challenges, especially in the face of the COVID-19 pandemic, leaving hundreds of thousands of families struggling.

“Our province is in the midst of a generational economic shift. We need a new economic strategy, and we need it now,” said Notley. “We must build a modern, diversified economy that benefits all Albertans and ensures nobody is left behind. Alberta’s advantage is not under the ground, it’s walking on the ground. It’s everyday people that make Alberta strong. It’s time for us to forge a new path together.”

Over the coming weeks, the Alberta NDP Caucus will release detailed economic diversification proposals that will outline new ways to create good paying jobs and grow Alberta’s economy. Topics will include concrete steps to advance Alberta’s hydrogen industry and become a leader in the new global economy, new opportunities for extracting metals and carbon fibre from bitumen, and ways to leverage Alberta’s expertise in drilling oil and gas wells to develop geothermal energy and extract lithium.

The policy proposals will also include new initiatives to evolve and adapt Alberta’s agriculture industry, push the tourism sector to new heights, grow the arts and culture sectors, expand high-speed internet connectivity, generate a boom in the technology and artificial intelligence space, and advance strategic public investments to remove barriers for women and support new and continued business development.

Most importantly, Notley emphasized that the NDP economic strategy is an ongoing, dynamic vision for the province that will be built in conversation with all Albertans, across all political and ideological lines.

“To those that support us already but believe we need an economic vision, this is that conversation. And to those Albertans who voted for Jason Kenney, who think of themselves as small “c” conservatives but know the UCP doesn’t have the answers to our province’s great challenges, we want to earn your support. We want to involve you in the discussion. We want your help,” she said.

The Alberta NDP economic vision is based on the following principles:

In coming months, the Alberta NDP Caucus will host online conversations with public policy thinkers, business leaders, innovators, entrepreneurs and as well as in-person discussions across the province to engage with Albertans in their communities, subject to the latest public health orders and advice.

Albertans can learn more about how to get involved and share their ideas at www.AlbertasFuture.ca.